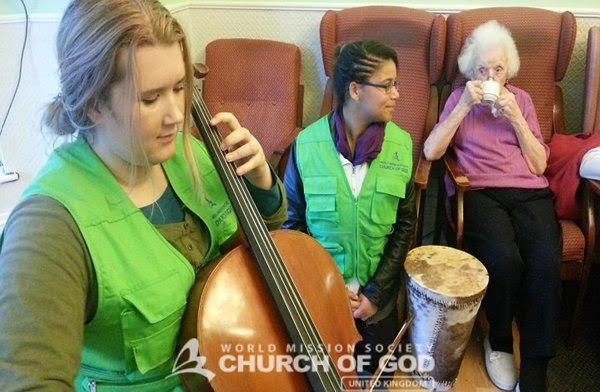 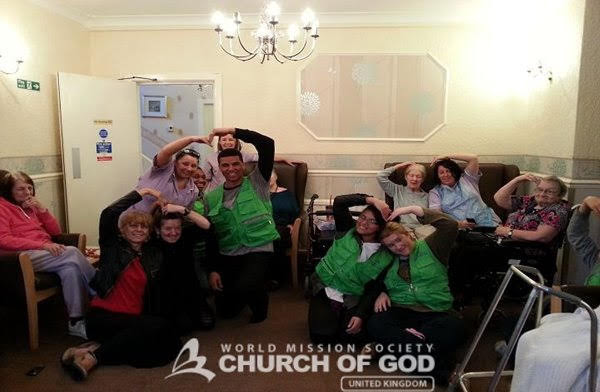 On a cold afternoon in April, Russley Lodge Nursing home residents cheered up instantly thanks to the lively entertainment and constant smiles. Volunteers from the World Mission Society Church of God (WMSCOG) came to enliven the residents. Russley Lodge nursing home, (manager: Carol Pearson) located on Wilbraham Road, Chorlton. The nursing home became filled with happiness, as the various energetic performances of the smiley volunteers filled the residents with life.

The senior citizens attending this event shared in an afternoon filled with vibrant performances. There were sing-a-longs, energetic dances, short dramatic plays and captivating musical performances. First, the volunteers serenaded the residents and carers with various classic ballads such as, “You Are Not Alone”, “You raise me up” and Robbie Williams’, “Angel”. Next, everyone present was filled with laughter and fun during the sing-a-longs. WMSCOG volunteers cheered up the nursing home residents performing humorous dances. They dressed up in costumes to familiar tunes such as “Under the Sea”. As well as watching scenes from Disney movies performed by the volunteer actors.

At the end of the performance, all the volunteer members injected one last gift to lift the spirits of all. Together they said, “Grandma/pa we love you” and finally in unison proclaiming the motto “We love you”. With expressive hand gestures, they warmed the residents and carers hearts alike.

When the volunteers first arrived, the Russley Lodge Nursing Home residents looked noticeably lacking in positivity and enthusiasm. Despite the fact that the carers put in great effort to watch over them. This is because senior citizens although such valuable members of our society are neither well respected nor paid much attention to. Realising this, the WMSCOG made it their goal to cheer up the senior citizens.  and let them know they are cared for as part of the teaching which they follow, “To give love is better to receive as God always gives love”.

One volunteer, Joseph Adams, described the residents’ reactions as, “really positive, they became lively, bright, and full of joy”. He also said that “the residents even participated by dancing, singing and were generally excited to get involved and be a part of the event.” “They laughed a lot and were often moved to tears”. This was all clear by what the nursing home residents said, such as, “ we love you”, “will you dance with me next?”, “when will you come again?” and by how much they laughed, bringing bright smiles to their faces.

Not only this, but the responses and comments from the carers were overwhelmingly positive. They even filmed the performance saying they loved it so much that they were going to show their families. They explained how and why the nursing homes residents cheered up. “As soon as you walked in your smiles were contagious”. “You guys are just so funny and enthusiastic.” “It is so rare to get this level of entertainment and dedication for free, even by paying.” And, “this is the most lively and engaging performance we have experienced and more than we could have hoped for, you have really cheered them up and us as well”. 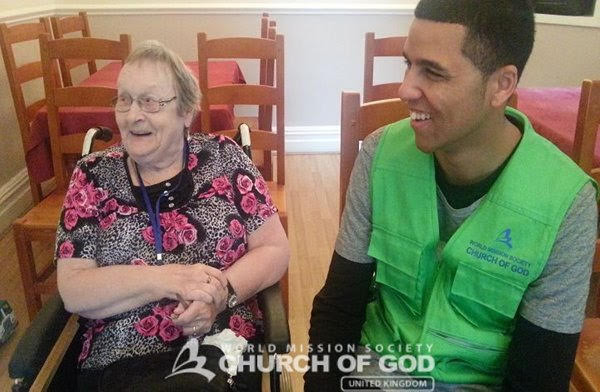 Mission to share the love of Mother throughout the world

This is all part of the Church’s mission to share the love of Mother throughout the world. The volunteers always give love with a smile. This visit to Russley Lodge Nursing Home was a definite success. It revitalised the minds and hearts of the carers and senior citizens often neglected by society. Hence, it is easy to understand why the nursing home quickly invited the volunteers to come again and give a second performance.

The World Mission Society Church of God volunteers continuously carry out this mission, and always look for new opportunities. We welcome anyone who would like to join in with the volunteering activities such as care home visits, clean-ups, bloods drives and much more, spreading the love of Mother across the UK. Please feel free to contact us.